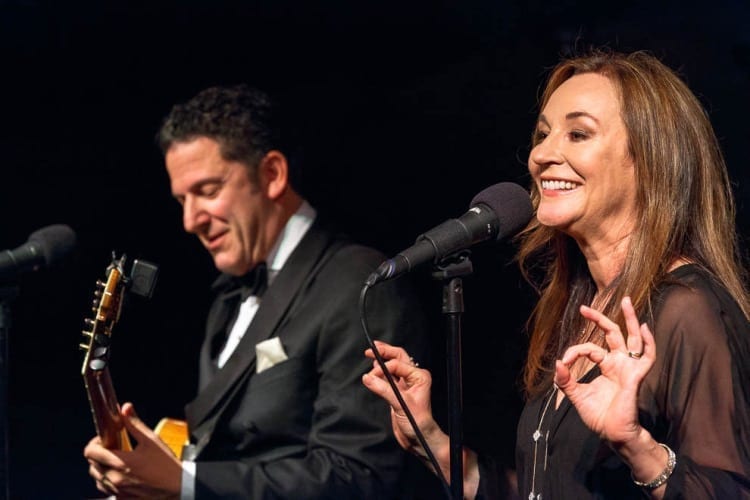 With every year that passes, the return of John Pizzarelli and Jessica Molaskey with a new show to The Cafe Carlyle signals the beginning of fall and provides proof that some shred of sanity remains in the world…or at least in New York City.  This long-married couple – both expert performers and raconteurs – matures like a fine wine, their musical selections growing more interesting and their interpretations more risky.  This year’s show, which opened on October 28, is entitled Grownup Songs and is no exception.

Pizzarelli & Molaskey have long championed Stephen Sondheim’s work but few performers brings the introspection and subtext to The Master’s complex melodies and lyrics this couple does, particularly Molaskey who is surely one of Sondheim’s most astute interpreters.  Placing the emphasis squarely on relationships and reminiscing, Sondheim’s songs are the thread that connects the rest of the show’s fabric.  Opening with a stingingly funny duet of “The Little Things You Do Together” from Company, the couple also excavates the beginning of “Country House” from the London production of Follies (paired with Paul McCartney’s “Heart of the Country”) in the middle of the show, before placing a searing duet of “Remember” from A Little Night Music and “The Road You Didn’t Take” from Follies in the eleven o’clock slot near the end.  Molaskey’s wistful rendering of the nostalgia-drenched lyric of “Remember” against Pizzarelli’s plaintive, soulful reading of “The Road You Didn’t Take” makes for an especially potent melding of emotional ideas. 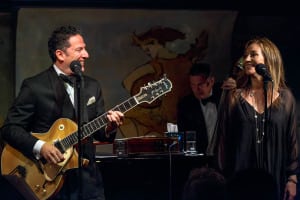 Superbly accompanied by Konrad Paszkudzki on piano, John’s brother Martin Pizzarelli on double-bass and Kevin Kanner on drums, the evening is lightened by several original comedy numbers by the duo including “The Forecast is Love” and “Dry Martini,” the latter an homage to the famous Mae West line, “…why don’t you slip out of that wet suit and into a dry martini.”  Additionally, there’s plenty of good, old-fashioned romance on-hand in the form of “You Made Me Love You” and “It Had To Be You,” Songbook classics at which these singers are unequaled.  If there is a centerpiece to Grownup Songs it would have to be Pizzarelli & Molaskey’s joining of “Dividing Day” from Adam Guettel’s brilliant The Light in the Piazza with Billy Joe’s “Lullaby.”  Melding a lyric about one relationship disintegrating with another lyric about a relationship beginning is what these accomplished performers do best.  What’s astonishing – and so richly rewarding – is how easy they make it look.