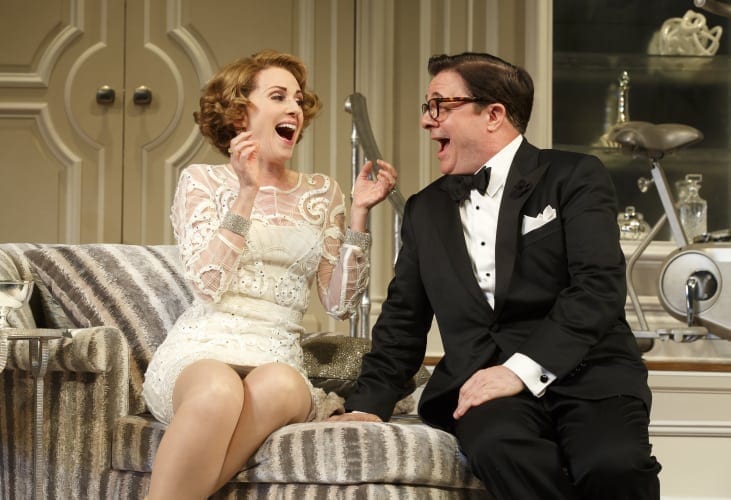 Oy vey!  Thank god for Nathan Lane.  Without him, the current revival of It’s Only A Play would be almost unwatchable.  Written by Terrence McNally and most recently staged by Manhattan Theatre Club in 1986 (following an aborted pre-Broadway tour as in 1978, and a little-seen, off-off-Broadway production in 1982 at the Manhattan Punch Line), the MTC revival starred Christine Baranski, Paul Benedict, Joanna Gleason and the late, great James Coco, and was directed by John Tillinger.  The current Broadway production stars Nathan Lane as James Wicker, a television star who’s flown from Los Angeles to New York for the opening of a new play by his best friend Peter Austin, played by Matthew Broderick.  Wicker, who turned down the play because he thought it was terrible, is waiting for the reviews at the opening night party at the home of the play’s wealthy producer, Julia Budder, played by Megan Mullally.  Waiting with Wicker and Austin are: the play’s leading lady, faded film star Virginia Noyes, played by Stockard Channing; the nasty critic Ira Drew, played by F. Murray Abraham; boy-wonder director, Frank Finger, played by Rupert Grint (of Harry Potter fame); and the fresh-off-the-bus, coat-check boy, Gus, played by Micah Stock making his Broadway debut.  At its best, It’s Only A Play was always a tissue-thin premise on which to hang a full-length play, filled as it is with insider theatrical references and jokes.  In reality, it’s a two-act sketch where the only plot turn is the publication in The New York Times of the opening night review for “The Golden Egg,” the play at the center of McNally’s love-letter to the comedic-horrors of pursuing a life in the theatre. 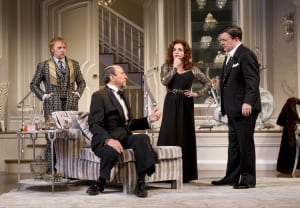 Though the star-wattage present in this current revival has resulted in the play’s run being sold-out, the production is a disappointment of miscasting and misdirection.  Though there are certainly some laughs (most courtesy of Lane), much of the writing (or, rewriting as is the case with this revival), timing and direction falls hopelessly flat.  As the playwright Austin, Matthew Broderick inhabits his role the way in the same manner he’s played his last several characters on Broadway.  He delivers his lines in a strange monotone and  moves stiffly on stage, as if he’s trying to keep himself from slipping into a coma.  Though it’s nice to see F. Murray Abraham in a comedy (and it should be noted that Abraham has done a lot of McNally plays over the years), he frequently overplays his hand, especially with all the overwrought laughing his character does.  Megan Mullally, a brilliant comedienne who’s gone out of her way to portray characters as far from Karen Walker (her Will & Grace alter ego) as possible, is delightful here, especially with some physical ‘business.’  But she still picks and minces at her role too gingerly to really nail it.  Stockard Channing, on the other hand, gets lots of laughs and goes at it hammer & tong with Lane for the audience’s affection.  But, as painful as it is to say this in print, the plastic surgery which Channing has obviously had done to her face makes it difficult to watch her on-stage.  As the dim-witted coat-check boy, Micah Stock is deliciously silly.  The play’s opening scene with Stock and Lane trading badinage is truly hilarious, leading the audience to think they’ve settled in for one of the funniest plays they’ve ever seen.  But then that scene ends and the rest of the play takes over.  For his part, Nathan Lane is utterly brilliant.  He gets laughs – big laughs – almost every times he opens his mouth.  Easily the greatest comedian of his generation, his sense of timing is unerringly flawless.  As for Rupert Grint, delightful as he was in his film work he is adrift here as a flamboyant director craving a flop instead of a hit. 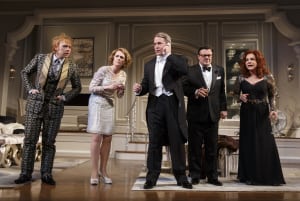 Between them, the usually reliable director, Jack O’Brien, and playwright McNally have erred most egregiously in their disregard of modern technology.  In this day and age of laptops, iPads and iPhones, no one would be using land-lines to conduct conversations or reading reviews over the telephone.  They would pull out their smart phones or tablets and conduct their business.  That both of them missed this obvious reality speaks volumes about their disconnect from contemporary life.