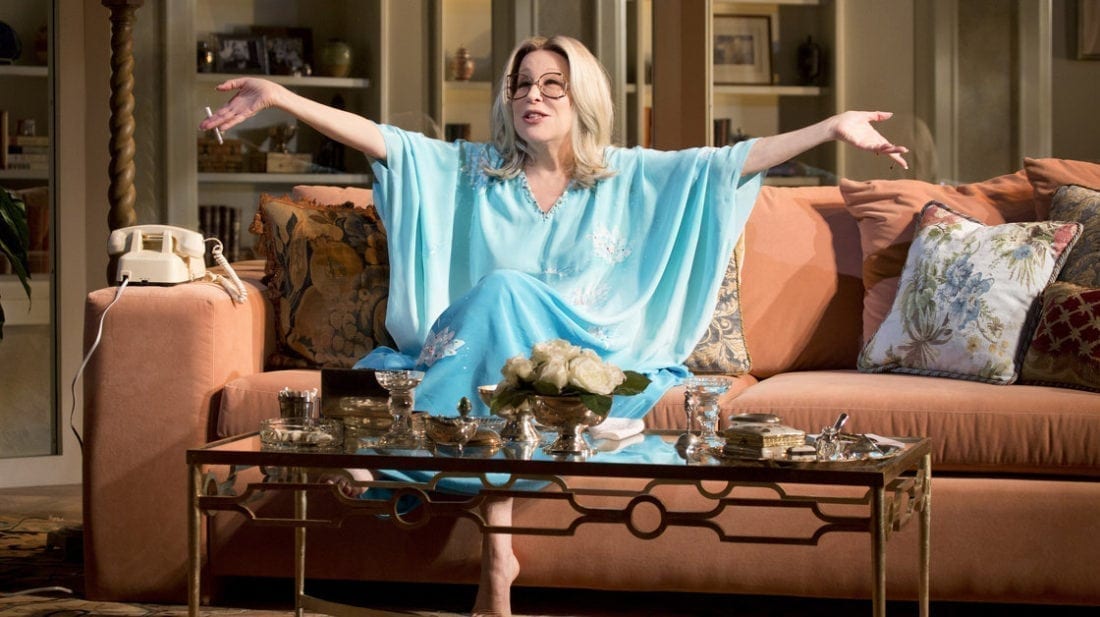 I’ll Eat You Last and The Testament of Mary

I’ll Eat You Last is divine and The Testament of Mary is closed!

The ‘Divine Miss M’ is back on Broadway again in a deliciously dishy monologue entitled I’ll Eat You Last: A Chat with Sue Mengers, written by John Logan and directed by Joe Mantello.  So who the hell is Sue Mengers, and why is Bette doing her first ‘book show’ since Fiddler on the Roof in 1967!  Mengers was one of the most powerful agents in Hollywood from the mid-60’s to the early 80’s.  She represented a who’s who of celebrities and filmmakers but her biggest client of all was Barbra Streisand.  Mengers was a brassy broad, a foul-mouthed wheeler-dealer and a ferociously tenacious hustler, notorious for being loyal to her clients.  She was also a pot-smoker and spent most of her life ensconced in a couch getting stoned and smoking cigarettes.  Mengers didn’t go to parties – the parties came to her!  Logan’s I’ll Eat You Last finds Mengers on a pensive night in 1981 when she’s waiting on a call from La Streisand.  Streisand’s lawyers had just fired Mengers as part of the fall-out from the disastrous response to All Night Long, a film starring Barbra and Gene Hackman that was directed by Menger’s husband, Jean-Claude Tramont, and Mengers was waiting to her from the diva herself.  Barbra thought she did the film as a favor to Sue, but Sue thought she was due her 10% commission on the $4.5 million payday she’s negotiated for Barbra.  Neither backed down, their relationship unraveled and Mengers’ career never recovered from the split.  Midler is dream casting as Mengers.  She’s hilarious telling stories and giving advice on what makes a fabulous dinner party or how to be a successful agent.  Midler’s timing is superb and, even if you’re not steeped in Hollywood lore or know about all things Streisand, you’ll have a terrific time watching Miss M work her sublime magic.

On the other side of the coin, there’s the already shuttered monologue from Colm Toibin, The Testament of Mary, starring a mannered Fiona Shaw and directed with a heavy hand by Deborah Warner.  Toibin’s provocative story of Mary’s perspective of losing her son (we’re talking about Jesus Christ of Nazareth here), and the cult that sprung up around him after his crucifixion, got lost in Shaw’s histrionics and Warner’s endlessly fussy direction.  Shaw had some lovely moments, but the piece lost me from it’s pre-show prologue when the audience was invited up onto the stage to walk around, gawk at Shaw sitting in a glass box and take pictures of the audience.