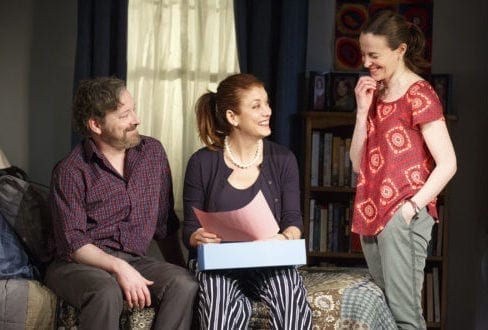 In Steven Levenson’s hilarious and heartbreaking If I Forget we meet the Fischer family, a dysfunctional clan of siblings who can’t agree on anything and yet remain fiercely united in their dyspeptic dysfunction.  Set in 2000-2001 on the even of the 9/11 attacks, they are Jewish but can’t even agree on how much religion should be a part of their lives.  The youngest sister Sharon, played with relish by the amazing Maria Dizzia, was the most observant but she’s given up teaching to become the caregiver for their ailing father, Lou, played with calm righteousness by Larry Bryggman.  Resentful and angry since she discovered her boyfriend and her cantor on her new duvet, Sharon has an axe to grind.  The middle sister Holly, embodied with no-nonsense flair by Kate Walsh of Private Practice, only attends synagogue on the high holy days and appears to have a charmed life as an interior designer.  But disaster lurks under the surface of her marriage thanks to her husband Howard, played with henpecked contriteness by Gary Wilmes.  Older brother Michael, a sensational Jeremy Shamos, is a professor of Jewish studies but doesn’t attend synagogue at all.  Michael’s new book is about to be published – an examination of how the Jewish obsession with the Holocaust is robbing Jews of their identity – which has enraged both his father, who helped liberate Dachau, his wife Ellen, played with cool reserve by Tasha Lawrence, not to mention the tenure committee at his university where his job may now be in jeopardy.  Throw into the mix a family real estate decision and a financial drama for an explosive recipe of accusations, revelations and recriminations enough for the Old Testament.

Levinson, who wrote the The Language of Trees and The Disappearance of Tom Durnin for the Roundabout, Masters of Sex for Showtime and the book for the current Broadway smash Dear Evan Hansen, has a gift for dialogue that caresses and bruises at the same time.  Lovingly directed by Daniel Sullivan on a multi-level set by Derek McLane, the Fischer family in If I Forget argues and fights like all families do, they’re just funnier doing it.