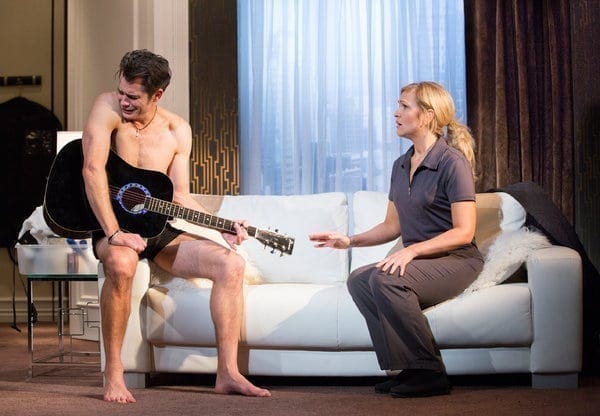 As all serious lovers of theatre will tell you, nobody writes dialogue like Kenneth Lonergan.  But his well-honed knife cuts both ways in his latest talk-fest, “Hold On To Me Darling,” currently ensconced at the Atlantic.  Directed with nuanced subtlety by Neil Pepe, “Darling” contains Lonergan’s characteristically insightful characters but they don’t know when to stop talking.  It’s a blessing and a curse in the case of this sweet, funny, moving, but overly long new drama.

Timothy Olyphant, of television’s “Deadwood” and “Justified” fame, plays Strings McCrane, a wildly successful country music star who goes back home to deal with family issues and gets more than he bargained for when he tries to simplify his life.  Olyphant is terrific in a wide-ranging performance that allows him to run the gamut of emotions, and, thanks to him, “Hold On To Me Darling” has moments of searing hilarity and heartbreaking recognition.  But Lonergan doesn’t know when to stop.  As McCrane, Olyphant finds the right balance in a celebrity narcissist who thinks he can shed the trappings of fame to run a feed store in quiet, anonymity.  The problem is, as Lonergan’s play progresses, it’s hard to believe a county star of McCrane’s fame, stature and longevity would say and do such naive and ridiculous things.  In the end, the plot and dialogue defy credulity, despite a touching scene with Jonathan Hogan as Mitch that fills in a lot of McCrane’s backstory.

For its part, the cast is superb, particularly Keith Nobbs who plays McCrane’s worshipful personal assistant Jimmy, C.J. Wilson who plays McCrane’s disbelieving brother Duke, and Jenn Lyon who plays Nancy, a hotel masseuse who sees a meal-ticket in McCrane and knows she’ll need to fight to hang onto her man.  The problem with Strings McCrane as currently written by Lonergan is, who’d want him?