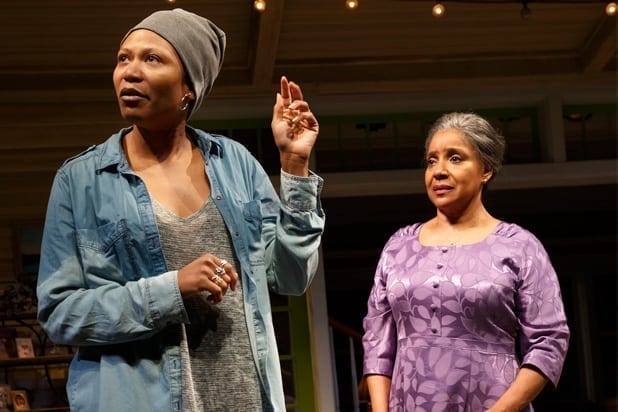 Having given us plays as diverse and wonderful as “Wig Out,” “Choir Boy” and “The Brother/Sister Plays,” playwright Tarell Alvin McCraney has now written a work about a contemporary, dysfunctional family that’s steeped in religious allegory, specifically the Bible’s book of Job.  Starring the indomitable Phylicia Rashad as the family matriarch, Shelah, “Head of Passes” boasts an impressive cast, a spectacular set change and a muddy second act.  Despite the latter, it’s possible Rashad may be giving the greatest performance on any New York stage this season which makes “Head of Passes” required viewing.

Set near the Head of Passes, where the Mississippi River meets the Gulf of Mexico, Shelah’s family is converging to celebrate her birthday, even as a rainstorm of biblical proportion begins to batter their family homestead.  The first act of “Head of Passes” is filled with crisp dialogue that establishes the various characters and all their various agendas.  Then the storm sets in and intermission is upon us, wherein G.W. Mercer’s house set literally sinks down into the stage where it tilts sideways and the entire set is flooded with water.  The second act takes place in water – both literal and metaphorical – as Shelah invests herself in a lengthy argument/monologue with God about her life and the place she now finds herself.  It is a bravura acting turn and Rashad deserves high praise for often rising above her muddled material and illuminating our collective humanity in what is a cri de coeur for her soul.

Beautifully directed by Tina Landau, “Head of Passes” has a superb supporting cast working with Rashad, particularly Shelah’s daughter Cookie for whom the family house is painful reminder of the abuse she suffered there.  As memorably portrayed by Alana Arenas, Cookie’s conversation with her mother is as devastating as anything you’re likely to see on a stage, anywhere.