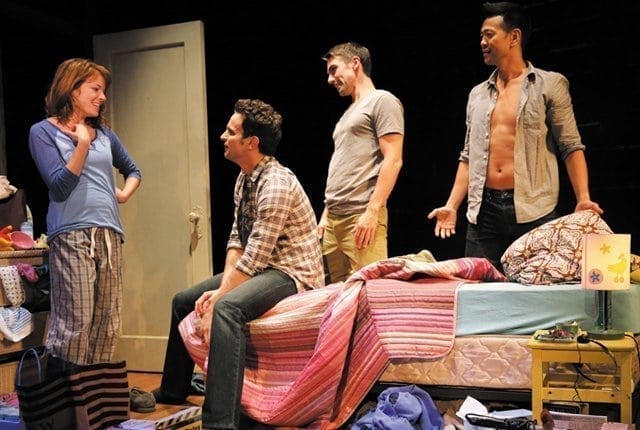 Gross Indecency, Far From Heaven, Good Television and The Tutors

Gross Indecency is insufferable, Far From Heaven is rapturous, Good Television could be better, and The Tutors need to go back to class!

When the Tectonic Theatre Project’s award-winning production of Moises Kaufman’s Gross Indecency: The Three Trials of Oscar Wilde opened in the summer of 1997, it was immediately evident we were witnessing a dazzling new form of docu-theatre – dazzling and informative all at once.  Having seen the original production several times, it was with both excitement and trepidation I ventured to see The BASiC Theatre Project’s new revival of Gross Indecency at GAYFEST NYC last week.  Sadly, it was an exercise in futility as the show has been insanely over-directed by Zi Alikhan to the point where Kaufman’s beautiful play (not to mention Wilde’s singular genius) has been totally overwhelmed by overbearing music, frenetic staging and stupefying choreography.  First staged at CAP21 last July with an almost identical cast (including a miscast Joshua Forcum as Wilde), this production of Gross Indecency has game actors who throw themselves into the work with passion and energy.  But under Alikhan’s incomprehensible and maddening direction, their efforts are as exhausting as they are misguided.  Unable to endure a second act of lunacy, I bolted at the intermission.

Richard Greenberg (book), Scott Frankel (music) and Michael Korie’s (lyrics) new musical, Far From Heaven, won’t be everyone’s cup of tea.  But, as stunningly directed by Michael Greif and performed by an excellent cast led by Kelli O’Hara, Steven Pasquale and Isaiah Johnson, lovers of thoughtful and penetrating musical theatre will be beside themselves if they’re lucky enough to score tickets to this ravishing and gorgeous production.  Based on the acclaimed, 2002 film by Todd Haynes that starred Julianne Moore, Dennis Quaid and Dennis Haysbert, Far From Heaven tells the story of Cathy and Frank Whitaker and the disintegration of their picture-perfect marriage when Cathy discovers Frank is gay and subsequently falls in love with their African-American gardener, Raymond Deagan.  Frankel & Korie’s score is rich in textural melodies and soars when sung by performers of O’Hara and Pasquale’s extraordinary caliber.  Greif’s smooth staging and direction are a pleasure, and the productions designers have outdone themselves with lavish costumes, lighting and sound – as well as a 12-piece orchestra.  There will be those naysayers who quibble that the stage musical doesn’t evoke the same tone and ambiance the film does, but how could it.  Film and stage are two totally different mediums.  But after sitting through dozens of dreadful ‘original’ musicals the past few years, Far From Heaven feels like heaven, indeed!

Rod McLachlan’s intriguing Good Television gets off to a smart start with an interesting premise about a reality show dedicated to documentary-style interventions for addicts, but gets too tangled up in its protagonist’s preachy emotional problems in the second act for the piece to be entirely effective.  Boasting a strong cast of women, especially Talia Balsam as a blousy, deadpan television executive, Good Television is a diverting drama about a young meth addict and his family who get caught up in the soulless clutches of reality TV.

I’m not sure who’s selecting plays for 2econd Stage’s ‘Uptown’ series the last few summers, but whoever it is needs to keep reading!  Their opener this summer is Erica Lipez’s The Tutors, a ridiculous piece of writing redeemed only by its cast, including the adorable Keith Nobbs and Matt Dellapina as roommates and business partners, and Chris Perfetti as a troubled, rich high-school boy who befriends and blackmails them.  Lipez, an NYU grad who writes for the USA series Suits, occasionally pens some crisp dialogue and gives Perfetti some zingy one-liners that land.  But Aubrey Dollar’s schizoid-hallucinations of an on-line client and the gay subplot between Nobbs and Dellapina laughably defy credulity.