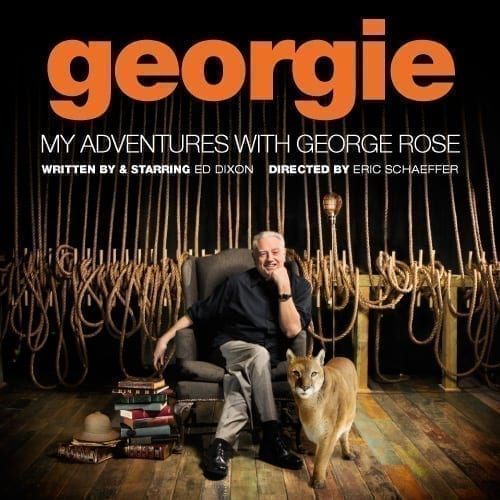 Georgie: My Adventures with George Rose ★★★★☆

Hilarious, heartbreaking, shocking and shattering.  What puny adjectives to describe Ed Dixon’s new solo show about his 20-year relationship with – and admiration of – the great, two-time Tony winning actor, George Rose.  A wildly eccentric and, as it turns out, deeply conflicted man with a lacerating wit and an incandescent talent, Rose was a brilliant actor who conquered the stages of London and New York.  Dixon’s devastating one-act monologue is an homage to his friend and mentor, as well as an attempt to make sense of Rose’s untimely death at the age of 68 in the Dominican Republic where he was beaten to death by his adopted son, Juan, and three other men including Juan’s father.

Directed with calm precision by Eric Schaeffer, the Artistic Director of the Signature Theatre in Washington, D.C., where Georgie was originally produced last January, Dixon regales us with anecdotes about Rose including their meeting (in a touring production of The Student Prince), Rose’s Bank Street apartment (where he kept an assortment of wild animals including a pair of mountain lions), his male dressing-room assistants (who always wore a French maid outfit and answered to the name of Lisette) and his endless collection of theatrical stories which gives Dixon license to give us delicious impersonations of Katharine Hepburn, Noel Coward and Richard Burton, among others.  Among the many life lessons Dixon learned from Rose was that it was possible to be gay in New York in the 1970’s and still have a career in the theatre.

Georgie continues on this path with Dixon reconstructing the highs and lows of Rose’s esteemed career before Rose’s life takes a turn upon his purchasing a house in the Dominican Republic in 1984 and meeting Juan.  When Dixon finally takes a trip there to see the house and meet Juan, he’s horrified to discover Juan is a teenager and that Rose frequents a house of prostitution with underage boys.  When confronted, Rose replies “…oh no, dear boy.  It’s part of the culture.”  Dixon returns home in disgust but his world falls apart upon Rose’s death.  It’s a stark ending to what’s come before.  But it’s the truth, as visceral and disturbing as it is.  Who among us hasn’t discovered a horrible truth about someone we love and admire that’s shaken our world to its core.  That Dixon is brave enough to dig deeply into that truth and expose his own fears give Georgie a power that’s all too rare in the theatre today.