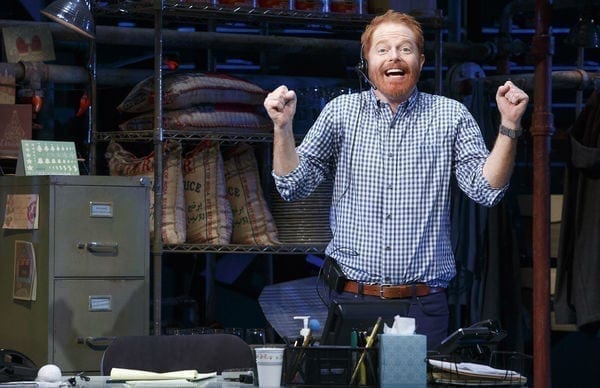 When Becky Mode’s hilarious “Fully Committed” burst on the scene in 1999 at the Vineyard, it starred Mark Setlock from the original cast of “Rent.”  It was a show in the right place, at the right time, with the right unknown star.  New York’s culinary scene and world of celebrity chefs was just taking off and Mode’s one-man show about the craziness and pretension of working at an impossible-to-book restaurant felt cutting edge and very of-the moment.

It’s a testament to the talent and acting skill of Jesse Tyler Ferguson (“On the Town” and “The 25th Annual Putnam County Spelling Bee”) that he’s able to make “Fully Committed” as funny and entertaining as he does.  The theatre in which it’s currently ensconced, the Lyceum, is way too big, and the conceit of one actor playing dozens and dozens of roles doesn’t have the freshness it had in 1999.  Still, the inventive set by Derek McLane goes a long way to creating a more intimate space and, lets face it, Ferguson is genuinely talented.

Whirling around stage going 100 m.p.h., changing voices and characters at the speed of a smart phone, Ferguson rises to the challenge of “Fully Committed” and makes it his own.  Catch him while you can in this limited run.