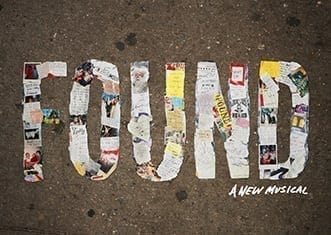 Though unknown to me prior to seeing Found, a new musical with a score by Eli Bolin and a book by Hunter Bell & Lee Overtree, the person it’s (loosely) based on is Davy Rothbart, a Renaissance man if ever there was one.  Rothbart, a former Chicago Bulls ticket scalper, created Found magazine in 2001 before subsequently publishing the best-selling book Found: The Best Lost, Tossed, and Forgotten Items from Around the World in 2004, followed by a second book in 2006 and a third book in 2009.  Who knew?  Apparently, a lot of people because prior to the musical Found, which is currently being produced by the Atlantic Theater Company, the Alarm Clock Theatre Company in Boston produced a multimedia, fringe piece, also with songs, called P.S. Page Me Later in 2005, also based on Rothbart’s whimsical premise that there was an audience for the lost and mislaid detritus of our lives.  Two shows about the same magazine within ten years?  Really?  With this much theatrical attention can an opera commission be far behind?  Well, based on Found, perhaps a moratorium on the Rothbart franchise should be enacted before any more shows come down the pike.

To be fair to Rothbart, and, to some extent, book writers Bell and Overtree, the latter of whom is also credited as the show’s director, many of the notes, letters and scraps of paper from Rothbart’s Found that serve as the musical’s source material, are hilarious, while some are just humorous and others are genuinely heartbreaking.  Several are unquestionably idiotic, but, as read and delivered by a robust cast of fresh-faced hopefuls, they’re all rendered far funnier than they actually are.  I didn’t see P.S. Page Me Later (the title of which is the ironic postscript from the first note Rothbart discovered that started his Found journey, as well as being a pivotal line of dialogue in the new musical), but the problem with Bolin, Bell & Overtree’s Found is the story they attempt to craft around their bits and pieces of lost correspondence.  It’s a standard, show-business yarn: a hapless, average dude comes up with a great idea for a magazine, enlists some similarly hapless friends to help him publish it, falls in love with two different girls who compete against each other for his affection, then sells his idea to Hollywood where his life falls apart before he realizes he had everything he really wanted back in Kansas, er, uh…Chicago.  The ongoing device in Found is that the character’s dialogue is punctuated with ‘real-life’ found notes and scraps of paper which the ensemble interjects with fevered gusto, these notes usually having a direct relation to the dialogue currently being spoken.  It’s often funny, but it also becomes tedious and ultimately is a device which can’t sustain a musical for more than two hours. 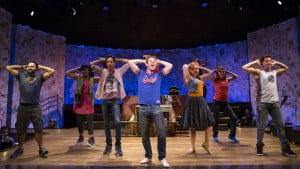 The songs, too, in Bolin’s score are essentially the found notes and scraps of paper set to music.  Bolin’s music is – thankfully – melodic and perky, the way a lot of derivative pop music is today, but it’s not especially inspired or memorable.  In act two, after a stupefying number that seemingly has nothing to do with the show (“Cats Are Cats”), the act goes off the rails with a couple songs (“Right Now” and “Killin’ It”) which sound as if they were written directly for the plot of their musical instead of oddities set to song.  Gradually, the creators seem to get back on track but Found never really recovers before coasting into its predictable ending. 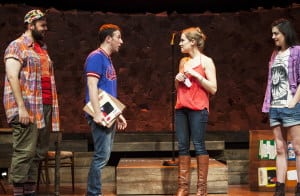 The hard-working cast is, for the most part, pleasant and charming.  Nick Blaemire (a writer and star of the ill-fated Glory Days) plays Davy with a winning combination of optimism and cluelessness that’s easy to root for despite his obvious personal and professional missteps.  His best friend Mikey D is played with bearish insouciance and light-heartedness by the cuddly Daniel Everidge.  Meanwhile, Davy’s two rivals are portrayed by Barrett Wilbert Weed (late of Heathers) as Denise, the Bohemian smarty who waits patiently for her man to come to his senses, and by Betsy Morgan as Kate, the shallow Hollywood producer who convinces Davy to sell his soul to the devil, in this case a network television show.  Unfortunately, for some unknown reason, Found‘s leading ladies – who both have nice voices –  are encouraged to do some crazy, high belting which turns into shrill screaming.  It happens in “Stupid Love” with Weed and again in “Killin It” with Morgan – to wince-inducing effect.  (What happened to breathing from the diaphragm and singing with a supported tone?)  Somewhat surprisingly, the cast member who made the biggest impression, and the one who made me laugh the loudest, was Molly Pope, whose unerring sense of timing and terrific delivery of every ‘note’ she was assigned was perfection.