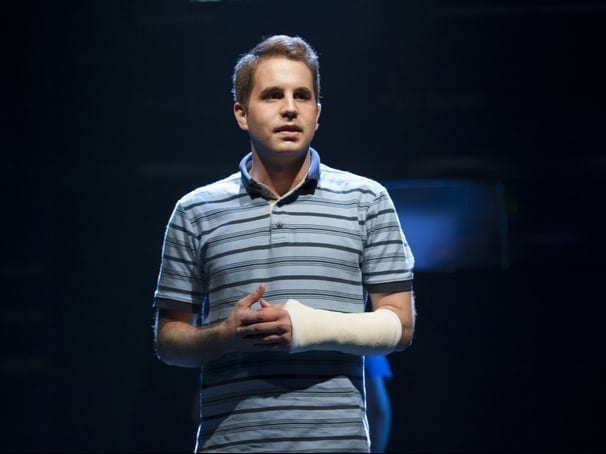 A cautionary tale of the dangers of social media combined with teenage isolation in the internet age set to one of the most beautiful scores in recent memory, “Dear Evan Hansen” is a shattering new musical that is sure to make a star out of its leading man, Ben Platt.  With a sensational new score by the talented team of Benj Pasek & Justin Paul (who wrote “A Christmas Story, The Musical” for Broadway and “Dogfight” and 2econd Stage), “Dear Evan Hansen” is cunningly directed by Michael Greif (“Rent”) with an indispensable design team whose set (David Korins), lights (Japhy Weideman), sound (Nevin Sternberg) and, especially, projections (Peter Nigrini) take us into a digital world of an incredibly lonely young boy who makes a terrible decision with disastrous consequences.  Watching “Dear Evan Hansen” is the equivalent of watching that decision unravel and explode in front of us.

The 8-member cast is uniformly superb, starting with its star, Ben Platt as Evan, who’s giving the kind of knockout performance that wins awards and forces critics to head to their thesauruses to come up with new adjectives.  Platt plans Evan, an awkward high school student who’s bullied and/or ignored by his peers until Connor Murphy (a pitch-perfect Mike Faist) – a casual acquaintance who happens to be one of those bullies – commits suicide and a note to Evan is found in his pocket.  One lie leads to another and, before you can say ‘FaceBook,’ Evan’s life has spiraled out of control.  In becoming a spokesman for disenfranchised students, Evan becomes popular and even starts dating Connor’s beautiful sister, Zoe (a moving Laura Dreyfuss).  But Connor’s grief-stricken parents, Larry and Cynthia (John Dossett and Jennifer Laura Thompson, both heartbreaking) and Evan’s mother (the superb Rachel Bay Jones) can’t understand what’s going on with her son.  Of course, as with all lies the truth eventually comes out and the fallout is predictably disastrous.

Greif’s fast-paced production, coupled with Nigrini’s sensational projections which perfectly capture social media exploding out of control, give “Dear Evan Hansen” a gritty and sharp-edged feel which help to illuminate the material.  But it’s Platt’s achingly realized performance of a troubled adolescent, struggling to find his voice and make sense of his internal yearnings that is the heart and soul of “Dear Evan Hansen”.  To call his performance amazing is an understatement and when the show moves to Broadway, as it inevitably must, it seems inconceivable that he won’t win a Tony Award.  If you’re lucky enough to have tickets to the 2econd Stage production (it’s completely sold-out), here’s a word of advice: take Kleenex!

(“Dear Evan Hansen” has announced it’s transferring to Broadway this fall.  It begins previews in November and will open December 4, 2016 at the Belasco Theatre.)