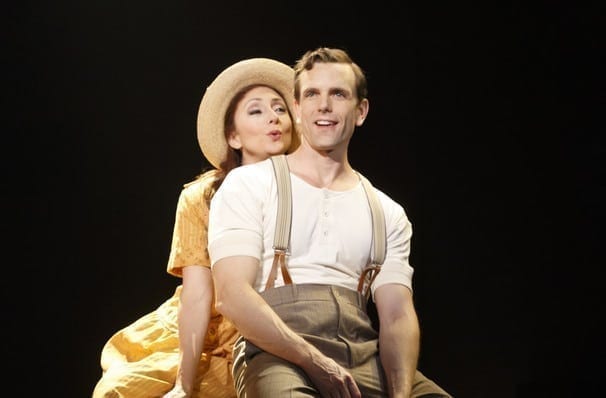 The new musical “Bright Star,” based on a ‘true event’ and written by the unlikely, musical team of Steve Martin & Edie Brickell, has a lot of wonderful elements in it.  Gorgeously designed and produced, it boasts a talented cast led by a “star-in-the-making,” Carmen Cusack, who bursts onto the scene like a rocket fired at the moon.  It also has a lot of beautiful music in its plaintive, blue-grass score, and some touching performances by a stellar supporting cast.  But it also has problems.  And those problems have the potential to derail the production for some theatre-goers who prefer their musicals sophisticated instead of home-spun.

The basis of “Bright Star”is the story of (spoiler alert) a baby who is thrown from a train but survives and is found by a couple who raise it.  That premise alone is enough to put off a sizable portion of potential audience members.  But Martin & Brickell have wrapped that story in a healthy sugar-coating of small-town cliches that may induce eye-rolling if it doesn’t have you reaching for your handkerchief.  This writer did both, but my handkerchief was moist at the end of the show so it won out over a modest amount of eye-rolling.  Undoubtedly, “Bright Star” (a terrible title, by the way, though I don’t have a better suggestion) will ‘play in Peoria’ and across the vast ‘middle’ of the United States that loves their stories simple and their endings happy.  But how well it will play in the jaded jungle of New York City’s theatrical titans is as yet unknown.  That’s a shame because its merits outweigh its problems.

It’s 1923-24 and Cusack plays Alice Murphy, a bookish, ‘smarty pants’ who falls in love at a tender age with Jimmy Ray Dobbs, and who can blame her?  As portrayed by the handsome and well-toned Paul Alexander Nolan, Dobbs is the kind of good-ole boy who can fix a refrigerator and discuss literature, all while sweating in a skin-tight, wife-beater.  But Dobbs overbearing father who also happens to be the Mayor, played malevolently by veteran Michael Mulheren, doesn’t want his son marrying poor-white trash and insists his son eschew college and follow-him into the family business.  Throwing a wrench into that plan, poor Alice get pregnant and you can guess the rest of the plot if you read the spoiler alert in the preceding paragraph.  Unfortunately, almost all of the reliable Mulheren’s scenes and songs are ludicrous, particularly the stupefying lyrics to “A Man’s Gotta Do” which Mulheren sings before tossing the baby in question off the back of a speeding train.

“Bright Star” spends its time switching back and forth between 1923-24 and 22 years later in 1945-46 when Alice is an established editor at a prestigious literary magazine.  To her credit, Cusack’s ability to time-travel those 22 years between wide-eyed adolescent and seasoned professional is jaw-dropingly impressive.  Before you know it, a 22-year old writer just home from the war, Billy Cane, played convincing by an adorable A.J. Shivley, is thrown into the mix and, well, it doesn’t take a degree in nuclear physics to figure out where our story is going or how “Bright Star” is going to end.  But, with the exception of an unnecessary production number set in a bar called “Another Round,” getting to the ending elevates “Bright Star” with truly heartfelt performances by Cusack, Nolan and Shivley that can move even the most jaded of New York theater-goers.  Whether or not it survives on Broadway, “Bright Star” will be a BIG hit across the vast heartland of our country.