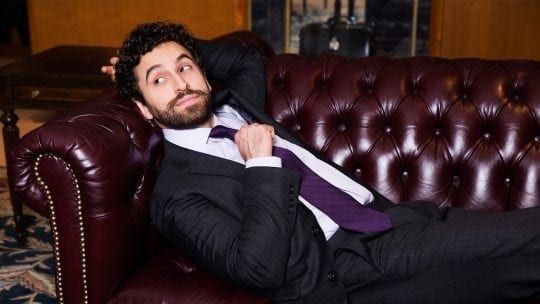 Making an astonishingly self-assured cabaret debut last night at 54 Below, the only thing more remarkable than Brandon Uranowitz’s chutzpah is the magnitude of his talent.  Having taken Broadway by storm the past two seasons with a Tony-nominated turn as Adam Hochberg in An American in Paris and what should be a Tony-nominated turn as Mendel in Falsettos, Uranowitz’s sheer effortlessness as a performer is jaw-dropping.  With a delicious combination of wit, charm and self-deprecating brashness, he dazzled the audience with a collection of complicated, lyric-heavy William Finn songs only someone as young and unafraid as Uranowitz would dare program.  Fortunately, he has the impeccable musical director and accompanist Vadim Feichtner collaborating with him and, together, they made Finn’s dense and rapid-fire songs a wondrous treat; providing clarity as well as comedy.  From “How Marvin Eats His Breakfast” (In Trousers) to “Wizzer Going Down” (In Trousers) to “Republicans” (Elegies – A Song Cycle) to “And They’re Off” (A New Brain), Uranowitz tore into Finn’s material with a fearless intensity – and deadly accuracy – that was thrilling for the audience.  Never once showing any sings of tentativeness or ‘nerves’, his laser-like focus was unerring in both execution and fervor.  Uranowitz find quiet moments of pathos with “Mark’s All-Male Thanksgiving” (Elegies – A Song Cycle), one of Finn’s most heartbreaking offerings, as well as introspection in “The Essential Me,” a song with music by the gifted Deborah Abramson that’s new to this writer but a welcome addition to Finn’s canon.

Wisely, Uranowitz generously shared the stage with extremely talented friends in his Finn exploration, including the luscious Alysha Umphress and his partner of six years, the sinfully handsome Zachary Prince.  Together they provided the kind of luxury back-up singing on several numbers most performers can only dream about.  Umphress, who recently achieved ‘goddess’ status with her divine performance as Hildy in On The Town and her sensational, jazz-infused, debut CD with Jeff Blumenkrantz, I’ve Been Played, on the Yellow Sound Label, conquered Finn’s “Song of the Full Refrigerator” with music by Will Aronson (from Barrington Stage Company’s Songs by Ridiculously Talented Composers and Lyricists You Probably Don’t Know But Should), knocking it out of the proverbial park before dueting with Uranowitz on the gorgeous “I’d Rather Be Sailing” (A New Brain).  For his part, Prince lent his rich, lyric baritone to an emotional duet of “What Would I Do?” (Falsetto land) with Uranowitz which was heartfelt and beautifully sung.  Prince hasn’t had good luck yet on Broadway (not his fault, to be sure) but I sense his time is due – and soon – as he’s clearly got the goods.

Uranowitz’s special guest star was his recent co-star and love-interest in Falsettos, Tony-nominee Stephanie J. Block, who gamely played second fiddle while Uranowitz sang “A Marriage Proposal” (March of the Falsettos) to her before she killed it with “I’m Breaking Down” (In Trousers/Falsettos), a number she now owns after turning it into a showstopper.  A natural raconteur, Block also told a hilarious story about an on-stage mishap in Falsettos that delighted the audience even it mortified Uranowitz.  Possessing one of the best belts on Broadway, the always reliable Block gave perhaps her most nuanced performance as Trina in this season’s Falsettos and it would be nice to see her rewarded with the Tony that’s inexplicably eluded her to date.

Throughout his show, Uranowitz peppered his patter with hilarious personal anecdotes and reminiscences, many dealing with his sexuality and all of them delivered with a spontaneity that masked what I’m assuming was careful planning and forethought.  A quivering live-wire of energy and bravado, to close his show Uranowitz encored with a new and obscure Finn collaboration, again with music courtesy of Deborah Abramson, called “I Love My Voice.”  A delicious trifle that allowed him to showcase equal parts childlike wonder tinged with back-stage jadedness, Uranowitz floated off-stage in a gossamer sheen of self-knowing narcissism.  With a poof and a swish, he was gone – and that seemed just the way he wanted it.