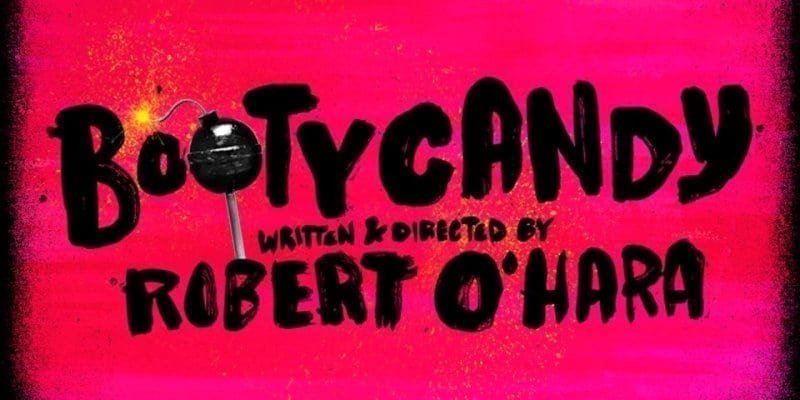 Written and Directed by Robert O’Hara

Robert O’Hara’s quasi-autobiographical BOOTYCANDY is as provocative as it is outrageous.  It’s also too long and would benefit enormously from a different, more ruthless, director unafraid to trim scenes and sharpen its structure.  By turns filthy, shocking, hilarious and upsetting, BOOTYCANDY is filled with vibrant characters that walk the fine-line between being racially offensive and being undeniably real.  It’s clear O’Hara wants to make us think.  He also wants to make us uncomfortable.  Perhaps he even wants to make us feel ashamed.  But perhaps that’s not such a bad thing in 2014, coming as it does from a black, gay playwright who’s been around the block a few times already.

First produced in Washington, D.C., at the Wooly Mammoth in 2011, and again in Philadelphia at the Wilma Theater in 2013, BOOTYCANDY is a series of eleven vignettes about the growing up, self-discovery and coming out of a gay, black man named Sutter over the course of several decades.  At first it doesn’t seem the scenes are related or tied together to any extent.  It’s only as the stories progress that the connections and the totality of what we’re seeing becomes clear.  The ties that bind the scenes are in our humanity – they’re in our collective consciousness – they’re in our acknowledgement and acceptance of the mistakes that have been made by the people who have come before us.  If that all sounds like a ‘heavy trip’ to take in a night at the theatre – be not afraid. O’Hara wraps his proselytizing in a combination of humor and love, with a little heartache thrown in for good measure. 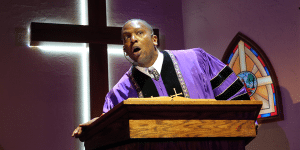 Scene 1, “Bootycandy,” opens with a young Sutter, sensitively and persuasively played by Phillip James Brannon, questioning his mother, the sensational Jessica Frances Dukes, about his penis and certain words boys are using at school.  His mother, who’s given her son a dictionary to replace having to deal with his questions, wants to take him for a haircut and insists he call his penis a ‘bootycandy’ and not a ‘dick’.  Further questioning on Sutter’s part only antagonizes his mother, laying the groundwork for a lifetime of communication problems we’ll witness over the course of the play.  Scene 2, “Dreamin’ in Church,” finds the minister at Sutter’s church, Reverend Benson, preaching a sermon to his congregation they won’t soon forget.  In it, Benson slowly comes out to them as a cross-dressing, gay men who’s friendlier with the boys choir (of which Sutter is a member) than he should be.  The Reverend is played by the versatile Lance Coadie Williams, whose been with BOOTYCANDY in all its previous incarnations as has Brannon, and his testifying, call-and-response sermon is unforgettable.  It’s also 10-15 minutes longer than it should be.  This is the first scene of many which goes on far too long in making its point – as delightful and funny as it may be.  Scene 3, “Genitalia,” is a truly inspired comment on the outrageous names given to children in the African American community wherein the brilliant Benja Kay Thomas along with Dukes each play two women who are having phone conversations each other.  Costumed and made-up as two characters each, every time Thomas and Dukes turn to one side they become a different woman.  It seems a friend of theirs wants to name her new baby girl Genitalia and all four women have a lot to say about that questionable choice.  It’s funny stuff, but is also racial stereotyping?  Should we be laughing at them?  Or is okay because O’Hara is black himself and it’s okay for him to be the one calling the issue out? 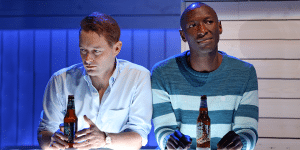 Scene 4, “Drinks and Desire,” is a carefully considered study of what happens when a gay man falls in love with a straight man who has no intention of leaving his straight life to be with him.  O’Hara’s examination also adds the racial layer that it’s black gay man, Sutter, who has fallen in love with a white straight man, Roy, portrayed by a devastating Jesse Pennington.  How Sutter and Roy know each other adds yet another shocking layer to this tragic, all to common dynamic.  Scene 5, “Mug,” where Clint (Pennington again) is waiting for a bus late at night and fends off a mugger with a rambling monologue about why the mugger shouldn’t waste his time mugging him.  The least successful of O’Hara’s vignettes, perhaps “Mug” would feel more realistic if the mugger were actually on-stage with Clint.  As it is, it merely feels like an acting exercise or a time-filler which BOOTYCANDY certainly doesn’t need more of.   Act One concludes with Scene 6, “Conference,” a meta-theatrical exercise wherein a moderator (Pennington) leads a panel discussion at Playwrights Horizons (get it?) between four African American playwrights (Brannon, Williams, Thomas and Dukes) about their work which turns out to be four of the short scenes we’ve just seen.  Much of it is quite clever and packs a bite in its superficial treatment of black writers – though O’Hara let’s it go on too long, as is his wont. 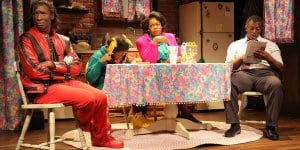 It’s in Act Two that BOOTYCANDY really gels.  Scene 7, “Happy Meal,” may be the fulcrum for the entire play.  In it, Sutter, now in high school and dressing like Michael Jackson, confesses to his parents (Thomas and Williams) that a strange man has been following him home from the library.  Their response which accuses him of culpability, coupled with their lack of concern, sets Sutter on his way to anger and ambivalence that will have serious consequences.  Scene 8, “Ceremony,” finds the now grown-up Genitalia (Thomas) and her girlfriend Intifada (Dukes) having a ceremony in which they divorce each other and publicly declare their antipathy towards one another.  “Ceremony” starts out hilariously but, once again, O’Hara lets the joke go on far too long and undoes his own funny idea.  Scene 9, “The Last Gay Play,” finds Sutter and his friend Larry, who’s a drag-queen, baiting a drunken white guy (Penington) in a bar.  They decide to go back to his hotel with him to teach him a lesson, but the evening gets out of hand and they end up humiliating him with disastrous consequences.  The next day Larry confronts Sutter about their actions and discovers that Sutter actually enjoyed degrading “the white guy” and, worse, that it wasn’t the first time he had done it.  Scene 10 dissolves into another meta-moment conceit wherein the actors stop the action of the play and jump forward after arguing about the validity and truthfulness of Scene 9.  This second jump into meta-theatre works less well and seems both out of place and unnecessary.  It’s self-indulgent on the part of O’Hara and draws attention to the fact that the scene’s uncomfortableness had gotten away from even him.  Scene 11, “iPhone,” ends with Sutter visiting his grandmother (Williams again, in a delicious turn) in her retirement home.  It’s sweet, if a bit saccharine conversation, which allows BOOTYCANDY to conclude on a happy, upbeat note. 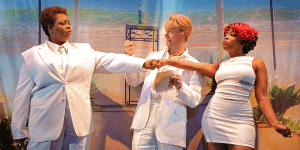 In both structure and style, O’Hara’s BOOTYCANDY owes a debt of inspiration to George C. Wolfe’s seminal The Colored Museum (1986).  Of course Wolfe was one of O’Hara’s early mentors and was instrumental for getting O’Hara’s time-traveling examination of slavery and homosexuality, Insurrection: Holding History (1996), produced at The Public during his tenure as its Artistic Director.  Themes of racism and homophobia run throughout that work, as well as his Nazi-Deep South Antebellum (2005) and his futuristic The Living Room (2008).  But BOOTYCANDY is different in that it’s more deeply personal and it deals with being black and gay today, in contemporary society.  O’Hara is undeniably talented.  One hopes he won’t let that talent obscure the obvious fact that his work could be even more powerful if he would collaborate with a director other than himself.