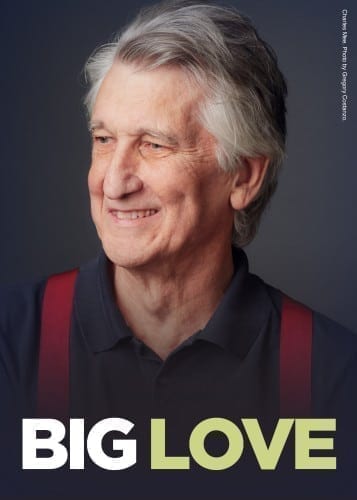 Currently the Signature Theatre is offering playwright  Charles Mee’s Big Love.  Not to be confused with the HBO television series of the same name which aired from 2006-2011, Big Love is essentially  a play with music – but “essentially” is the key word here.  According to the “From the Playwright” program notes, Mee’s script is freely “inspired” from Ancient Greece, specifically The Danaids by Aeschylus, one of the earliest Greek plays extant.  Aeschylus’ work was in turn based on Greek mythology relating the imposed marriage of 50 sisters to their cousins.  (This in itself may have potential as yet another HBO series, but I digress).  As if this lineage weren’t complicated enough, Mee also cites eleven other authors as inspiration or “texts taken from”.  If Big Love had succeeded in combining and adapting these varied influences, it would have been an amazing feat of alchemy, indeed, especially since thrown into its elaborate mix is pop music and various musical genres which seem to include cabaret tunes.  As they occur in this production, however, the incoherent stretches of the play, though well- staged, are sunk by the few moments of lucid dramaturgy.

The artistic vision for Big Love at Signature is courtesy of Mee’s long-time collaborator, Tina Landau, a director well versed in the art of bringing cohesion to elements of spoken word, music and movement to create a hybrid entertainment form.  Notable in my experience of Landau’s previous efforts, her success with the Vineyard Theatre’s Wig Out and Signature’s own Old Hats stand out.  Unfortunately, there is only so much a director can do with material that seemingly prides itself on its lack of sense or structure.  Big Love begins with a strong opening salvo of action introducing its female leads, three brides who have fled  for asylum in Italy (only 3 of Aeschylus’ 50 brides, no doubt).  A woman in a soiled bridal gown enters, finds a bathtub, strips, and bathes onstage.  Soon her sisters join her and sing a strong version of the girl group hit “You Don’t Own Me.”  We  then learn this girl and her sisters are fleeing pre-arranged marriages in their native Greece.  They will plea with their Italian host to broker a deal with their husbands-to-be who follow in pursuit of their long-promised brides.  The hosts are an extended Italian family who unwittingly become the arbiters in a maelstrom that began a country away.  In any case, the play’s author attempts to mix myth, music, and modern entertainment with poor results. 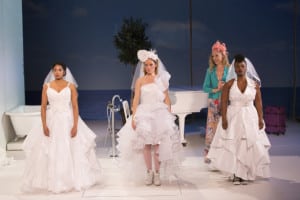 Several strong performances merit mention.  A stand-out turn by the charming Lynn Cohen as the matriarch of the host family includes some delicious stage business with tomatoes representing her many sons.  Her second act monologue also almost saves the show.   The female leads and their corresponding grooms-in-pursuit literally throw themselves into their roles.  Their physical commitment only makes you wish their efforts were supported by stronger material. 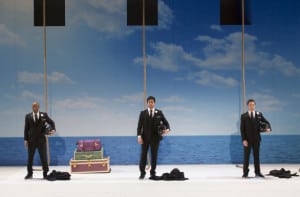 Charles Mee is quoted on a site of his published works as claiming,  “there is no such thing as an original play.”   He opines that all authors meld their own personal sources into the reality of their creations.  To me, this academic approach seems acceptable only if you are not pretending to produce an entertainment meant to be shared in a communal environment, that is, theatre!  The Signature Theatre threw an impressive array of technical theatre craft at this production including the considerable contribution of Austin Switser’s projection design.  However, all efforts are thwarted by the author’s shortcomings at telling a simple tale.  The result is that Big Love remains a thesis, but offers no logic or satisfaction at its final curtain.