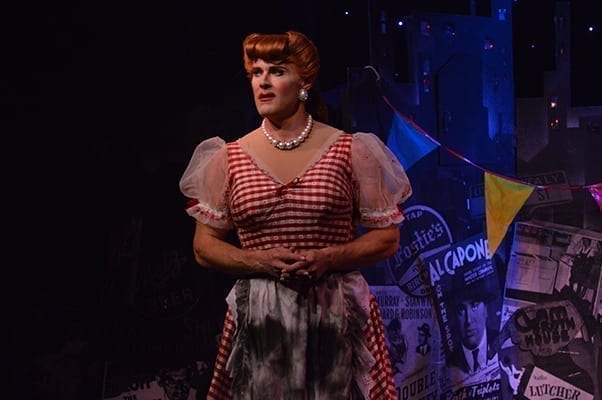 Tracee Chimo is unforgettable as a bad Jew, and Varla Jean Merman is unleashed as Joan Crawford!

Joshua Harmon’s fiercely unapologetic comedy, Bad Jews, has lost none of its bite in its move upstairs to the Laura Pels following its sold-out world premiere last fall in the Roundabout’s tiny ‘Underground’ space.  They may have a bigger stage and a larger audience, but director Daniel Aukin (LCT’s 4000 Miles) has kept the original cast tightly strung and Harmon’s 100-minute drama acutely uncomfortable.  The story of first cousins Daphna and Liam arguing over ownership of their late grandfather’s “Chai” necklace, Bad Jews is as hilarious to watch as it is painful to experience.  On its surface, Harmon’s play is about the clash of family personalities and religious ideologies.  But as it progresses the cousin’s suppressed agendas rise to the surface, exposing the raw nerves of everyone involved with heartbreaking precision.  As Liam and Melody, an assimilated Jew studying Japanese culture and his shiksa girlfriend, Michael Zegen and Molly Ranson are terrific.  So too is Philip Ettinger as Liam’s quiet brother Jonah who attempts to keep the peace and stay out of the fray.  But it’s Tracee Chimo’s brilliant performance as Daphna, a master manipulator and uber Jew, which anchors Bad Jews and gives it a vortex of exhausting sound and fury.

It’s easy to love The Gold Dust Orphans’ hilarious musical send-up Mildred Fierce even though it cries out for a bit more polish and panache.  The Orphans, a 20-year old, Boston and Provincetown based theatre group, are making their long-awaited New York debut with Mildred Fierce and they have the perfect ‘leading lady’ in Varla Jean Merman (a.k.a. Jeffery Roberson), a savvy comedic actor who’s mastered the art of spoofing classic films in campy drag.  Written by Ryan Landry and directed by James P. Byrne, The Orphans’ show is, of course, a loving homage to Joan Crawford’s Mildred Pierce, stuffed full of additional movie references, silly musical numbers and a healthy dose of vulgarity.  To really enjoy Mildred Fierce you just have to sit back and let yourself laugh, forgetting about the seams that show in the Orphans’ production.  With the exception of the occasional Charles Busch offering or TWEED ‘Fractured Classicks,’ nobody is specializing in this kind of delicious, camp parody anymore so its all the more reason to cherish The Orphans efforts.