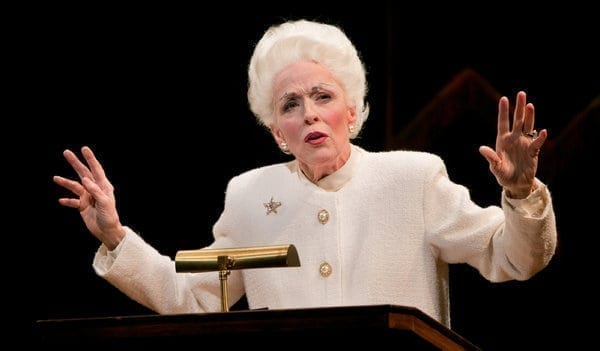 Holland Taylor dazzles in Ann, Stonewall is honored in Hit the Wall, and ‘The Evolution of Man’ inspires TOTEM!

The great Holland Taylor is back on the boards in New York – and not a moment too soon.  Taylor, best known for her snappy supporting work in television shows like Bosom Buddies, The Practice and Two and a Half Men, has written herself a funny bio-play about the late governor of Texas, Ann Richards, and the part fits her like a glove.  The play itself is a little rough around the edges with too many endings and the inevitable visit from the hereafter.  But Taylor delivers Richards’ caustic zingers with razor-sharp timing and clearly adores her subject.  There is a long sequence where we watch Richards working in the governor’s mansion that is particularly terrific.  Fielding phone calls and yelling at her assistant (voiced by Tony-winner Julie White, no less!), Taylor finds a rich, three-dimensional humanity to Richards that allows us to see a woman of towering strength, determination and homespun grit.

First seen in Chicago last year as part of Steppenwolf’s Garage Rep. series, Ike Holter’s new play, Hit the Wall, has its heart in the right place even if it doesn’t quite accomplish its goal.  An homage to the famous Stonewall riots of 1969, Hit the Wall is a collage of characters and situations that explore the long-simmering tensions and animosity that exploded into resistance early on June 28, 1969 in Greenwich Village.  Creatively directed (in a space that can’t contain it) by Eric Hoff, Hit the Wall boasts a talented and committed cast that throw themselves into their roles with unbridled passion and enormous humanity.  Particularly memorable is the amazing Nathan Lee Graham, who plays an African-American drag queen with a ferocity and intensity that’s amazing.  But Holter has bitten off a bit more than Hit the Wall can chew in trying to give voice and life to the enormous issue of gay rights and the historical moment that was Stonewall.  It has many moments of power and insight, but ultimately Hit the Wall leaves you wanting more.

Cirque du Soleil’s new show TOTEM has set up shop out in Queens at City Field, and it’s worth a trip on the #7 train.  Written and directed by Robert Lepage, TOTEM is an ideal combination of extraordinary design (as always, the costumes are shattering), jaw-dropping athleticism and creative storytelling.  Using ‘The Evolution of Man’ as a jumping off point, Lepage moves the performers whimsically through a series of Darwinian motifs that include the usual bevy of flawlessly chiseled male physiques.  The ‘Hand Balancer’ and the ‘Rings Trio’ are particularly breathtaking in this edition.  But the stars are pair of sisters billed as the ‘Crystal Ladies’ who twirl little rugs on the feet and hands while laying upside-down on stands.  It’s impossible to describe but unforgettable to watch!

The York Theatre’s ‘Musical in Mufti’ series is not open for review but an exception must be made for their recent concert revival of Happy Hunting.  A legendary turkey from 1956-57 that was a vehicle for the great Ethel Merman, Mufti found the perfect star to step into The Merm’s pumps in Klea Blackhurst.  Blackhurst, a self-proclaimed worshiper of everything Merman who has a phenomenal set of pipes herself, brought this rickety, old chestnut to life March 15-17, getting laughs where none existed and belting the songs for all they were worth.  Aiding her in resuscitating Happy Hunting was the handsome and charming Michael Sharon, who stepped into the Fernando Lamas role of The Duke of Granada with stylish panache and the perfect light, comic touch.  It will never grace Broadway again, but what a delicious treat to savor Happy Hunting even in ‘Mufti’ form.  And Klea Blackhurst could read the phone book and I’d buy a ticket!