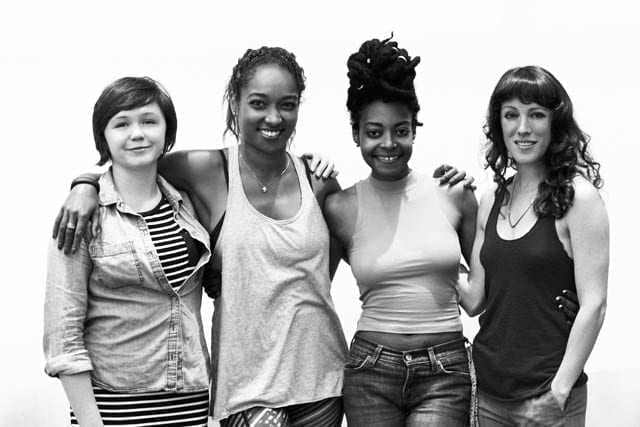 It was fascinating watching Naomi Wallace’s And I And Silence at Signature so soon after seeing a production of Jean Genet’s The Maids at New York City Center as part of the 2014 Lincoln Center Festival.  In Genet’s Maids, two sisters engage in role-playing in which one of them dominates their mistress in an existentialist examination of social class, while in Walace’s Silence two women who have been incarcerated together for many years engage in role-playing in which they teach each other the proper way to become the perfect servant.  Both plays involve abusive criticism while in the midst of the women’s ‘pretending,’ and both plays examine women struggling to find their identity and maintain their sanity in the midst of crushing social injustice.  The parallels between the two pieces are as eery as they are heartbreaking.

But Wallace, a prize-winning playwright from Kentucky, goes into different territory than Genet because And I And Silence is also about race; Dee is white and Jamie is black.  Additionally, by alternating scenes with two different sets of actresses, Wallace portrays her women at two different periods in their relationship and their struggle to break free of the constraints that bind them.  We find Young Dee and Young Jamie, skillfully portrayed by Emily Skeggs (Fun Home) and Trae Harris (Orange is the New Black), when they first meet in a cell in 1950.  Dee is determined to befriend Jamie but the latter is defensive and protective of herself, unsure of why a young white girl would want to be her friend.  The older Dee and Jamie, wonderfully played Samantha Soule (The Hill Town Plays) and Rachel Nicks (Nurse Jackie) , find themselves freed from incarceration but in another type of prison, that of a small room in a rooming house in 1959 where they try to hold down jobs as domestics while denying their unspoken love.

Since it was staged to critical acclaim in London in 2011, we’ve had multiple contemporary televisions shows like Weeds and Orange is the New Black which depict ‘women behind bars’ with a different sensibility than what Wallace is striving for in And I And Silence.  But sensitively directed by Caitlin McLeod and beautifully designed by Rachel Hauck (scenic), Clint Ramos (costume), Bradley King (lighting) and Elisheba Ittoop (sound/music), And I And Silence is a persuasive examination of the relationship that grows between Dee and Jamie over an extended period of time.  There is an urgency and poignancy in their struggle to create a life together.  Unfortunately, a sameness begins to creep into the alternating scenes of dialogue and we find ourselves watching the same conversation over and over again.  Additionally, an ending in which pent-up feelings are finally expressed and drastic choices are arrived at feels somewhat unrealistic, even in the hands of these capable actresses.  Still, with its title taken from an Emily Dickinson poem, And I And Silence is a harsh reminder that the 1950’s could be a cruel and unforgiving time – especially for women.