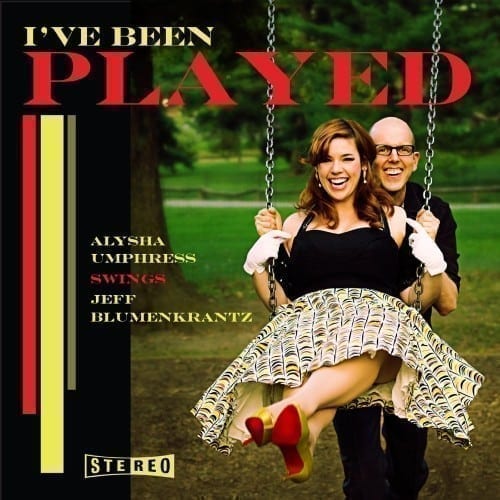 She’s been paying her dues for years now, but it’s finally payback time for the sensational Alysha Umphress!  And nobody could be happier than her legions of fans who have been singing her praises all along.  Never has the phrase, “I told you so,” seemed so apt or felt so sweet.  So why all the fuss?  Well, following fast on the heels of her critically acclaimed performance as Hildy the love-starved cabdriver in the scintillating new revival of On The Town, Umphress’s sensational new CD I’ve Been Played: Alysha Umphress Swings Jeff Blumenkrantz was released on January 6th to fantastic reviews following a sold-out release concert at Birdland on January 5th.

They’ve been friends for years, but the chemistry between Umphress’s phenomenal voice and Blumenkrantz’s savvy music is truly remarkable.  A formidable performer himself, Blumenkrantz has been writing music for years with songs notably appearing on recordings by Audra McDonald, Victoria Clark, Lauren Kennedy and Megan Mullally, to name just a few.  Blumenkrantz’s songs are carefully crafted gems, complete with tuneful melodies coupled with sensitive and honest lyrics.  And in Umphress, he may have found both his definitive muse and his ultimate interpreter.

Boasting a brassy, sassy, dramatic-mezzo, Umphress has one of those rare instruments that can conquer any genre of music, though she seems particularly predisposed to music from the 1930’s, 40’s and 50’s.  Whether it’s a comic ditty about everyone putting in their “Two Cents,” or a poignant ballad asking the timeless question “Why Can’t I Kiss You?,” or a torch song like “I’ve Been Played” that serves as the title track, Umphress shapes the tone and timbre of her voice to perfectly serve the tone and essence of each lyric she’s bringing to life.  One minute it’s warm as brandy and the next it’s cold as ice – and all of it channeled through a bombshell of a woman who’s luscious curvaceousness conceals a will of steel and a talent she can barely contain.  Whatever Blumenkrantz’s lyrics call for – be it sexy, vulnerable, angry or girlish – Umphress inhabits them with an insouciant ease that’s as disarming as it is dazzling.

In addition to ten original tunes – all sparkling winners that sound like classics in the American Songbook canon – Blumenkrantz includes a clever arrangement (with some new lyrics) of “I Don’t Need Anything But You” from Annie for the two of them to sing as a duet, and a medley of “Spring Is Here” & “Spring Can Really Hang You Up the Most” that Umphress turns into a heart-wrenching three-act play.  Additionally, Umphress & Blumenkrantz include a bonus track of “You Smell So Good,” a delicious bit of specialty material made famous by the legendary nightclub team of Jackie Cain & Roy Kral, that ends the disc with the perfect touch of silliness.  And while it’s true 2015 has just begun, it’s a sure bet I’ve Been Played: Alysha Umphress Swings Jeff Blumenkrantz will easily be one of the best new albums of the year!