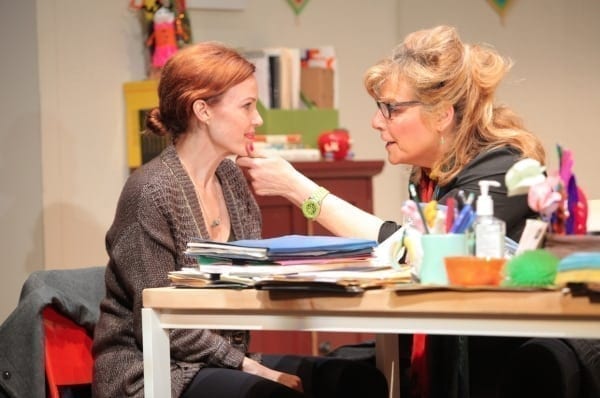 A Kid Like Jake, The Comedy of Errors and Unbroken Circle

Jake wants to be Cinderella, Comedy of Errors delights in the 1940’s, and Unbroken Circle is a family affair – literally!

It’s rare that a new, American play is actually about something, but playwright Daniel Pearle’s A Kid Like Jake takes on a whopper of a subject with style and clarity in a new LCT3 production.  You see, little 4-year old Jake (who we never see in the play) is a ‘special’ child who’s filled with imagination and self-possessed of opinions he’s eager to share.  He also wants to be a fairy princess, specifically Cinderella, which has thrown his parents Alex and Greg, terrifically portrayed by Carla Gugino and Peter Grosz, into a tailspin as they navigate the treacherous waters of applying for private schools now that Jake has outgrown preschool.  Jake’s preschool teacher Judy, played with biting realism by Caroline Aaron, is gently trying to get Alex and Greg to play up Jake’s ‘specialness’ on their applications, but, moreover, she’s trying to get them to acknowledge that Jake’s ‘gender variant play’ is clearly symptomatic of something more profound going on with their son.  Insightfully directed by Evan Cabnet, A Kid Like Jake spends too much time on the tribulations of the application process and Alex and Greg’s strained relationship when it should be tackling how they’re going to raise a son who may be transgendered or gay.  But much of the script rings authentically true as the audience eavesdrops on a couple as they attempt to remain open-minded and do the right thing for a son whose ‘specialness’ will require major readjustments on both their parts.

Daniel Sullivan’s sensational production of The Comedy of Errors is the first of two offerings of ‘Free Shakespeare in the Park’ this summer and it’s an unmitigated delight!  Trimmed and streamlined to a tight, intermission-less, 90-minutes, this Comedy boasts two bravura comic performances from Jesse Tyler Ferguson (Modern Family) and Hamish Linklater, as well as host of other pros like Jonathan Hadary, Skip Sudduth, Emily Bergl, Heidi Schreck, Robert Creighton, and Becky Ann Baker.  Ferguson and Linklater each play a set of twins, Dromio and Anthipholus of Syracuse and Ephesus, respectively, that were separated at birth by a storm – the kind of contrivance that Shakespeare loved and was his stock in trade for these kinds of trifles.  Linklater plays the two Antipholus’s and Ferguson the two Dromio’s, with comic confusion and mayhem ruling the day for the show’s swift duration.  What makes this Comedy particularly appealing is Sullivan’s decision to set it in the 1940’s, with the terrific music of that era providing a through-line throughout the entire production.  The show starts with pre-show of toe-tapping music and a troupe of fantastic dancers who start jitterbugging and never seem to stop.  The quick, scene changes are handled by the same dancers which allows the energy to keep flowing at top-wattage while Ferguson and Linklater grab a few seconds of rest off-stage.  Once the mistaken identities are sorted out and the lovers reunited, the entire company launches into a jitterbug of their own for a curtain call that will send you dancing out of Central Park feeling joyous and alive.  That it’s ‘free’ makes it all the more unbelievable.

The latest entry in the off-Broadway vanity production genre is James Wesley’s Unbroken Circle, which opened last week at St. Luke’s Theatre on Restaurant Row.  Playing only on Wednesdays, Circle is as well intentioned as it is tedious.  Influenced by equal parts sitcoms and after-school specials, Wesley’s inter-generational family drama tackles the serious issues of incest and childhood sexual abuse, but does so through a veil of one-liners and Southern accents.  Only Anika Larsen, in a subtle and understated performance, creates anything resembling an authentic character.  As the second act progresses revelations come fast and furious, but melodrama has taken over where shock should resonate.