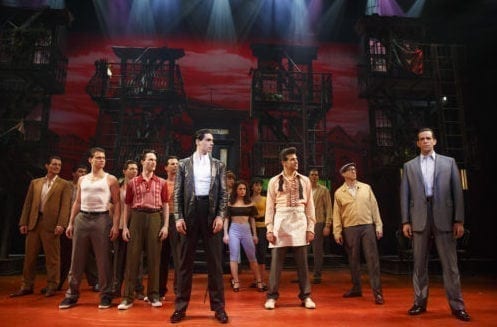 After starting life as an Off-Broadway solo vehicle for himself in 1989, Chazz Palminteri’s autobiographical A Bronx Tale did what it was supposed to do.  Namely, it got him noticed and gave him a career.  More importantly, it attracted the attention of Robert de Niro who brought the story – and Palminteri – to the screen in 1993, allowing de Niro to make his directorial debut in the process.  Amazingly, Palminteri then brought his solo show to Broadway in the 2007-2008 season.  So, with all that good luck and success was it really necessary to turn A Bronx Tale into a musical?  Apparently there was and, sadly, the results are on display at the Longacre Theatre for all to see.

Studiously co-directed by de Niro and Jerry Zaks with manic choreography courtesy of Sergio Trujillo, A Bronx Tale tells Palminteri’s story of a boy, Calogero (a fine Hudson Loverro), growing up in The Bronx of the 1960’s, the son of a proud bus driver (a spot-on Richard H. Blake).  Calogero witnesses a brutal murder by the neighborhood mafioso, Sonny (the charismatic Nick Cordero), but he doesn’t squeal to the police earning Sonny’s gratitude and protection in return.  As Calogero grows up (Bobby Conte Thornton) he’s forced to choose between an honest, upstanding life like his fathers or a life of crime in Sonny’s shadow.  Sprinkled into his coming of age tale is also an interracial romance between Calogero and Jane (Ariana DeBose) that, unsurprisingly, ends badly.

Despite the fact A Bronx Tale is professionally put together and the leads, particularly Thornton, Blake and Cordero, give solid performances, the problem remains its characters simply don’t need to sing.  To paraphrase Sondheim and one of his many dictates for musicalizing a play, novel or film,  “will it improve the story if the characters sing their emotions and feelings” and, in the case of A Bronx Tale the answer is no.  Its score by Menken & Slater is workmanlike and uninspired.  The songs actually slow down Calogero’s story and feel clunky, even when sung by capable performers.  It’s also worth pointing out that, late in the second act as Calogero’s story hurtles toward disaster, the sound design by Gareth Owen careens out of control as the amplification of the orchestra and the performers body mic’s are cranked up to ear-splitting decibels.

A final observation: early in the first act Blake and Loverro share a touching scene on a bench as father and son and I couldn’t help but remember when Blake, himself a child performer who’s enjoyed a long and successful career on Broadway, played the lead in one of the great flops of all time, 1989’s The Prince of Central Park.  Blake had shared a similar bench scene with the great JoAnne Worley in that show and I couldn’t help but imagine the empathy he must have toward Loverro as his character forged a connection to his son.  That I was thinking of that and not immersed in the story being told by A Bronx Tale speaks volumes about why its existence is simply unnecessary.